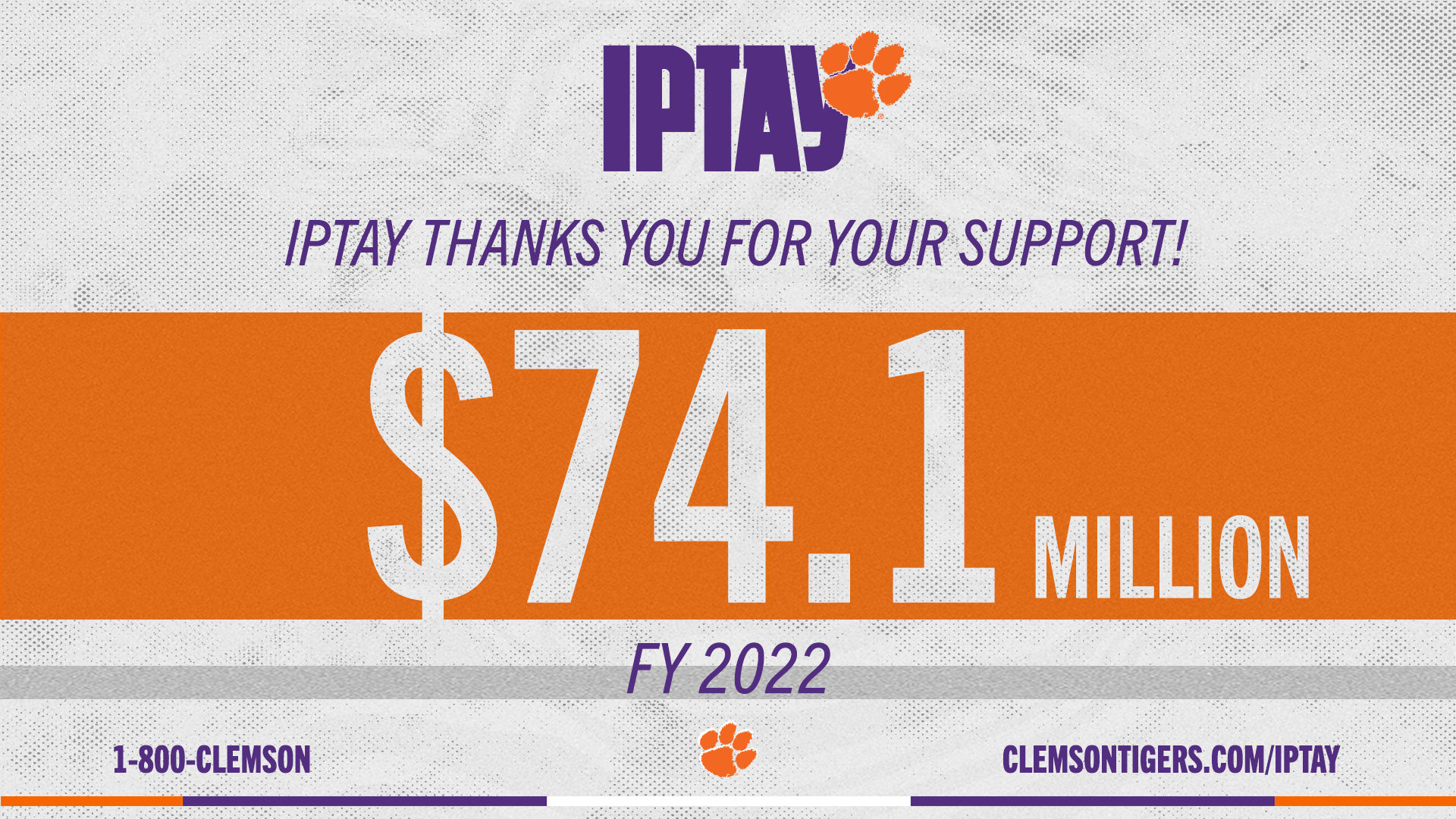 IPTAY, the fundraising arm for Clemson University Athletics, surpassed the $70M threshold for the third consecutive year. Ending on June 30, 2022, the “One-IPTAY” enterprise totaled a collective $74.1M in cash and pledges for IPTAY 2022 campaign. This total is the second largest raised in the organization’s history, only trailing the IPTAY 2021 year, which reached $76.3M. The cumulative total comprises of $39.1M in annual gifts, $22.3M in major gifts, $3.4M in planned giving, and $9.3M in premium seat donations.

“Each year I am genuinely amazed by the commitment and passion shown by our IPTAY donors. Their unwavering support of our now 21 sport program is remarkable, and I am grateful to each donor who is devoted to our cause of supporting Clemson student-athletes,” said Davis Babb, chief executive officer of IPTAY. “Due to the generosity of IPTAY donors, Clemson is an elite athletic program committed to providing a world-class collegiate experience to the more than 550 student-athletes who proudly wear the Paw. Gifts of any amount give resources to our student-athletes through scholarships, new and improved facilities, academic support, life skills, nutrition services, and beyond. On behalf of the entire Clemson athletics enterprise, I want to thank our donors for being on the IPTAY team!”

The IPTAY Tiger Cub Club, for supporters ages 0-12, had over 1,600 supporters in 2022. While the IPTAY Collegiate Club, the student group within IPTAY, had 8,373 donors, an increase of more than 20% from the previous year. These groups together contributed a total of $294,778. Block C Club, which concentrates on enhancing the lifelong experience of former Clemson student-athletes, had 1,084 members in 2022. Their philanthropic commitment to Block C reached $90,697, a 30% increase from 2021. Like the youth programs, these contributions are included in the annual fund overall total.

The Cornerstone Partners’ program, implemented in 2015, continues to be a significant fixture within major gifts at IPTAY. Three partners were inked in 2022, contributing towards the $22.3M total raised through major giving. With the addition of these three partners in 2022, the Cornerstone Partner Program within IPTAY has grown to 25 partners that have made a $2.5M gift or more to IPTAY and Clemson athletics.

For a complete recap of the IPTAY 2022 year, including a breakdown of donors by membership level, youth program results, the Block C Club, and more, follow the link below to the recently published IPTAY 2022 Year In Review.

Originally, the letters IPTAY stood for “I pay ten a year.” Begun in 1934 to give the Clemson athletic program the support it needed, IPTAY is now one of the most successful athletic fundraising organizations in the nation. IPTAY donors provide millions of dollars in scholarships for student-athletes and non-athletes alike. It also has provided substantial support for programs and facilities that help Clemson Athletics stay competitive in collegiate sports.